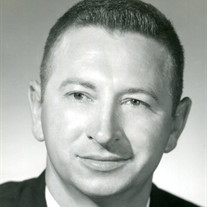 William Lee Thompson, 89 years of Punta Gorda, FL., passed away Wednesday, July 7, 2021. Bill was born May 15, 1932 in Columbus, OH., the son of the late Earl R. and Ruth (Ryan) Thompson. Besides his parents, Bill was preceded in death by one daughter, Trudy DuBois on January 31, 2020; two brothers, Robert and James Thompson; three sisters, Marjorie VonDoch, Martha Dunnagan and Catherine Walker. On May 15, 1951 Bill was united in marriage to Loretta G. "Scrubby" (Tong) Thompson -they recently celebrated 70 years of marriage. Besides his wife, Scrubby, he is survived by his grandson, William Jayson "Jay" DuBois of Washington DC; one brother, Ronald (Shirley) Thompson of Grove City, OH.; several nieces, nephews, cousins and a host of friends. Bill was a member of the Locust Grove Methodist Church and attended the Sinking Spring Community Church. He was a former member of the Sinking Spring Masonic Lodge where he served as secretary for many years. Bill was a 1950 graduate of Sinking Spring High School where he was an avid basketball player. After graduation, Bill continued his love of sports by umpiring local high school baseball games for several years. After graduating from Sinking Spring High School, Bill was employed by the phone company for a short period and had an opportunity to work for the Ohio Historical Society on November 1, 1951 starting as a park assistant at Fort Hill State Memorial. On April 1, 1953, becoming supervisor at Serpent Mound. Upon Harvey Cutright's retirement from the Historical Society, Bill became the District Manager of the Ohio Historical Society on July 1, 1966 and continued in that position until his retirement in 1981 after 30 years of service. In 2001, Bill and Scrubby returned to Sinking Spring to work and reside at the Wylie-Thompson Funeral Home. In 2013, Bill and Scrubby retired and moved to Punta Gorda, FL. to make there residence there. A memorial service will be held at a later date where he will be buried in the Locust Grove Cemetery. A memorial donation may be made in Bill's memory to the Sinking Spring Community Church, 3399 Carmel Road, Hillsboro, OH 45133 or donor's favorite charity.

William Lee Thompson, 89 years of Punta Gorda, FL., passed away Wednesday, July 7, 2021. Bill was born May 15, 1932 in Columbus, OH., the son of the late Earl R. and Ruth (Ryan) Thompson. Besides his parents, Bill was preceded in death by one... View Obituary & Service Information

The family of William Lee Thompson created this Life Tributes page to make it easy to share your memories.

Send flowers to the Thompson family.