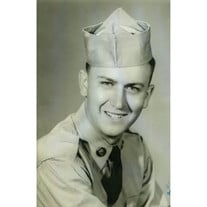 William H. "Bill" Siddons, 89 years of Hillsboro, passed away on Wednesday September 9, 2020. Bill was born in Hillsboro on April 10, 1931, the son of the late Basil Siddons and Mary (Roberds) Gall. He is also preceded by his sister, Virginia Boyle. Bill was a 1949 graduate of Hillsboro High School and attended the Ohio University. Bill was a proud veteran serving in the 14th Infantry on the front lines for 21 months from 1951 to 1953 during the Korean War earning the rank of Staff Sergeant. Bill worked many years at the Farmers and Traders Bank in uptown Hillsboro, now know as U.S. Bank. He retired after 46 years of service as Bank President. He served on the Bank Board of Directors from 1970-2001.After retiring from the bank, Bill sold real estate for Wilson National Real Estate in Hillsboro for several years. Bill was a member of the Hillsboro 1st United Methodist Church, life member of the VFW Post #9094 in Hillsboro and Hillsboro American Legion Post # 129, serving as the Commander in 1961-1962 and 1997-1998, Highland Lodge #38 F.& A.M. over 60 years. Bill served as the Liberty Township Clerk for six terms, trustee of the Hillsboro Cemetery for many years, President of the Hillsboro Chamber of Commerce in 1966, Treasure of the CIC from 1968 to 2001. Bill is survived by his wife, Ann (Holladay) Siddons: son, David Kim) Siddons of Colimbia, S.C.; two grandsons, William and Daniel Siddons of Columbia, S.C.; two brothers, Donald (Sue) Gall of Hillsboro and Ronald (Norma) Gall of Peoria, AZ.; brother-in-law, Harry Phillip Holladay of Raleigh, N.C.; nieces, nephews, cousins and a host of friends. Funeral Services will be 1:00 P.M. Saturday, September 12, 2020 at the Thompson Funeral Home in Hillsboro. Marvin Wilson will officiate services. Burial will follow in the Hillsboro Cemetery with Military Honors conducted by the the Highland County Honor Guard. Friends may call Saturday from 11:00 A.M. until 1:00 P.M. at the Thompson Funeral Home. Donations can be made to the Highland Co. Animal Shelter or the Highland County Humane Society. To sign our online guestbook, please visit us at www.thompsonfuneralhomes.com

William H. "Bill" Siddons, 89 years of Hillsboro, passed away on Wednesday September 9, 2020. Bill was born in Hillsboro on April 10, 1931, the son of the late Basil Siddons and Mary (Roberds) Gall. He is also preceded by his sister, Virginia... View Obituary & Service Information

The family of William H. Siddons created this Life Tributes page to make it easy to share your memories.

Send flowers to the Siddons family.