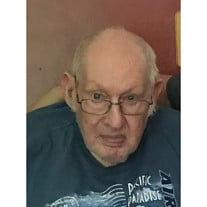 Warren D. Maier, passed away peacefully on Friday December 18 at the Bell Gardens Assisted Living in Hillsboro, OH. Warren was born on March 7, 1931 in Denison Kansas to Edwin and Ethyl Maier. He grew up on the family farm and graduated from Denison High School in 1949. Warren joined the US Marine Corp in 1951 and was stationed in Barstow, CA where he served two years. He returned to Kansas where met and married E. Darlene Plankinton, whom he married on April 25, 1955. Together they started their home in Salina, Kansas and he worked for JC Penney and International Milling Company. Warren and Darlene later returned to the Maier Farm and Warren worked at Seaboard Milling Company in Topeka, Kansas. He retired from there in 1996 after 33 years of work. Warren and Darlene were very active campers and involved with Good Sam Camping Club where Warren was the State Director. They belonged to a camping club in Holton for many years. Warren also spent 40 years umpiring softball, baseball and officiating basketball games in different locations. Warren served as a Boy Scout Director and helped out in various jobs for 17 years in Kansas. In 1997, Warren and Darlene moved to Hillsboro, OH to be close to their daughter, Deanna and her family. They spent many years attending their grandchildren's sporting events, plays, camping, being involved at Hillsboro First Baptist Church, gardening and enjoying retirement. Warren is preceded in death by his parents, wife, Darlene, who passed away on February 16, 2015 and an infant son, Douglas Dean. He leaves behind his son, Richard Allen and wife, Dorinda of McKinney, TX and their children, Heather (Jason) Curtis of Morehead, KY and Lindsey (Justin) Gonzalez in Grand Forks, AFB, North Dakota and daughter Deanna Kaye (Brian) Robinson of Hillsboro, OH and their children, Joshua (Ashlynn Pagliaro) Maier of Cincinnati, OH, Alora (Skyler) Pond of Sanford, FL and Jordyn (Steven) Evans of Hillsboro, OH, eight great grandchildren, Warren Allen, Marrissa, McKinley, and William Curtis, Taylor and Cole Gonzalez and twins, Beckett and Willow Pond. Arrangements are being taken care of by the Thompson Funeral Home in Hillsboro, OH and Mercer Funeral Home in Holton, Kansas. Visitation will be 6:00 pm to 8:00 pm Tuesday December 29, 2020 at the Mercer Funeral Home, 1101 W 4th street in Holton, KS 66436. Graveside service will be 10:00 am Wednesday December 30, 2020 at the Holton Funeral Home. Memorials can be sent to Highland County animal Shelter, 9331 OH-124, Hillsboro, OH 45133. To sign our online guestbook, please visit us at www.thompsonfuneralhomes.com

Warren D. Maier, passed away peacefully on Friday December 18 at the Bell Gardens Assisted Living in Hillsboro, OH. Warren was born on March 7, 1931 in Denison Kansas to Edwin and Ethyl Maier. He grew up on the family farm and graduated from... View Obituary & Service Information

The family of Warren Maier created this Life Tributes page to make it easy to share your memories.

Send flowers to the Maier family.