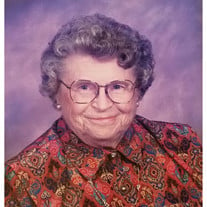 Velma Layman, age 95, departed this life June 27, 2019. Velma was born to the late Halder H. and Ethel (Prine) Gossett, April 11, 1924, near Pricetown, Ohio. She graduated as valedictorian of Lynchburg High School in 1941. Wilmington College awarded her a scholarship but she was unable to attend. Velma married the late John Earl Layman in 1944. Velma and John had four children, and for many years Velma's life was largely devoted to the task of raising them - a task she embraced wholeheartedly and with love. From 1968-1989 Velma worked at Wittenberg University in Springfield, Ohio managing circulation in the library. After retiring she moved to Ocala, Florida. Velma was a member of the Christian Church and was active in local churches until her health prevented it late in life. Velma loved music and for many years played the organ and piano in church. She was skilled at sewing, loved to make quilts, and she was an avid reader. Velma is survived by four children: John R. Layman and wife Beth, Daun Layman, Stephen Layman, and Richard J. Layman; five grandchildren: Bram Layman (Holly), Drew Layman (Elisa Nicolas), Jennifer Liming (Duane), Brad Oliver (Laurie Williams), John-David Barton (Addie); and by three great grandchildren. A memorial service is planned for 11:00 A.M. September 27, 2019 at Pricetown Church of Christ , with internment at the Ruble Cemetery. Gathering of Family and Friends will be held from 10:00 A.M. until 11:00 A.M. In lieu of flowers please consider a donation to Hospice of Marion County, PO Box 4860, Ocala, FL 34478.

The family of Velma Layman created this Life Tributes page to make it easy to share your memories.

Send flowers to the Layman family.