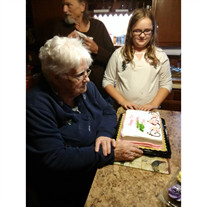 Rosemary Wright, 92 of Hillsboro, passed away Wednesday April 22, 2020 at her home. She was born on September 10, 1927 in North Moreland, OH to the late Jefferson and Irene (Womack) Crum. She attended Hillsboro Bible Baptist Church. She retired... View Obituary & Service Information

The family of Rosemary Wright created this Life Tributes page to make it easy to share your memories.

Send flowers to the Wright family.