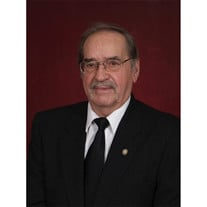 Lloyd Richendollar of Hillsboro Ohio, born November 10, 1930 in Haverhill Ohio, entered into heaven on April 24, 2019 at the age of 88, after a long illness of Rheumatoid Arthritis, COPD and heart disease. The son of the late Emil and Myrtle... View Obituary & Service Information

The family of Lloyd Richendollar created this Life Tributes page to make it easy to share your memories.

Send flowers to the Richendollar family.