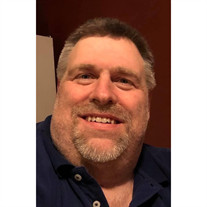 Joseph Alan Mahan, 50 years of Hillsboro, passed away on Sunday March 29, 2020 at the Miami Valley Hospital. Joe was born in Fairfax, VA on December 6, 1969, the son of the late Samuel Mahan and Helen Walton of Hillsboro. Joe is also preceded by his stepfather, Carl S. Walton and both sets of grandparents. Joe was a graduate from Hillsboro High School and received a degree in business from the Southern State Community College. He sold real estate for several years then opened Bon Appetit Gourmet Shoppe in 2012. He was the president of the Hillsboro Uptown Business Association (HUBA) for many years and organized the annual Christmas Parade during those years. He was on the board of The Visitor's Bureau and City Planning Commission, Secretary of the Liberty Lions Club and was involved in a lot of other community activities. He was a member of The Masonic Lodge #38, Liberty Lions Club, Eagles Club #1161 and Hillsboro Eastern Star #441. Besides his mother, Joe is survived by his two sons, Johnathan (Emily) Mahan and William Mahan, daughter, Elizabeth Mahan, grandson, Braxton Alan (to be born in May), brother, Chris (Lisa) Mahan, sister, Alicia (Brandon) Miller and the mother of his children, Melissa Mahan. He also leaves behind five stepdaughters, from a previous marriage, Faith N. Pullin, Samantha Morganson, Tori Lamke, Cheyanne (Billy) Gray and Kaytlynn Miller, four step granddaughters, Paiton, Alexis and Natalee Pullin and Braelynn Hopper and several aunts, uncles, nephews, cousins and a host of friends. Private Funeral Services will be held 2:00 PM Friday April 3, 2020, at the convenience of the family, at the Thompson Funeral Home in Hillsboro. Following services, a Funeral Parade will be held at 3:00 PM, from the funeral home to Hillsboro Cemetery. Anyone who would like to participate, we are asking that you gather at the Thompson Funeral Home at 2:30 PM. For those who can't participate in the parade, if you could stand outside your business to show your support and we will also be sharing the parade via Facebook Live on the Thompson Funeral Home Facebook page. The route we will be taking is East Main Street, South High Street, West Walnut, East North, West Main then to North High Street to the Hillsboro Cemetery. Donations can be made to the Liberty Lions Club, HUBA or to the Eagles #1161 To sign our online guestbook, please visit us at www.thompsonfuneralhomes.com

Joseph Alan Mahan, 50 years of Hillsboro, passed away on Sunday March 29, 2020 at the Miami Valley Hospital. Joe was born in Fairfax, VA on December 6, 1969, the son of the late Samuel Mahan and Helen Walton of Hillsboro. Joe is also preceded... View Obituary & Service Information

The family of Joseph Mahan created this Life Tributes page to make it easy to share your memories.

Joseph Alan Mahan, 50 years of Hillsboro, passed away on Sunday...

Send flowers to the Mahan family.