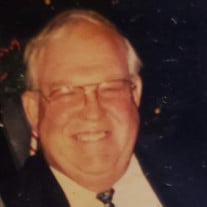 James Kenneth Banks, 83 of Hillsboro, Ohio has passed away on Tuesday, December 21, 2021. He passed from this life at home with his loving wife Della at his side. Kenny was born in Franklin, Ohio June 24, 1938 to father Shelby Brayton Banks and mother Julia Bell Eversole Banks. After graduating High school Kenny later met and married his wife of 61 years Della C. Williams Banks. Kenny leaves with us his Legacy as a man of God. He spent his life preaching and teaching God's word with a desire and hope of leading one more soul to Christ. During his ministry he received calls to preach in Ohio, Kentucky, Tennessee, and Indiana. Kenny and Della traveled many miles together over the years while he held revivals and preached God's Holy word. He was a loving husband to his wife Della, as well as an amazing father to his children and grandchildren. He loved his family unconditionally. Kenny worked as a Union Skilled Tradesman at General Motors for 31 years to support his family. He was a man of many talents, enjoyed nature and being outdoors. There was nothing he couldn't do, but his greatest accomplishment was his ministry and teaching his children and others about the gift of salvation. Kenny was a beloved son, brother, husband, father, grandfather, uncle, and friend. All who knew and loved him will sadly miss him. Kenny is survived by his wife Della C. Banks. His children Gregory S. Banks, Joseph B. Banks and wife Rene Garrison Banks, Gina L. Kalthoff and husband Ulrich Kalthoff, daughter-in-law Reme Banks. Grandchildren Chelsea Banks, Dillon Banks, Dallas Banks, Sheridan Banks, Wyatt Banks, Garrison Banks, Will Banks, Katie Kalthoff, Uli Kalthoff, and Kristi Kalthoff. Sisters Thelma Throckmorton, Norma Ogan, Edna Jones, Joan Hall, and brother Glen Banks, sister-in-law Minerva M. Tinch and many nieces and nephews. Kenny was preceded in death by his father, Shelby, mother Julia, father-in-law Dorsey Williams, mother-in-law Elsie Williams, son, Jeffery T. Banks, grandson Marshall R. Banks, Brother Luther Banks, brothers- in-law Harold Throckmorton, Curt Jones, Ken Hall, Chalmer Williams, Wade Williams, Bruce Williams, and sister-in-law Bernice Watkins. Funeral Services will be 11:00am Wednesday December 29, 2021 at Thompson Funeral Home. Burial will follow at the Reshaven Memory Gardens. To sign our online guestbook, please visit us at www.thompsonfuneralhomes.com

James Kenneth Banks, 83 of Hillsboro, Ohio has passed away on Tuesday, December 21, 2021. He passed from this life at home with his loving wife Della at his side. Kenny was born in Franklin, Ohio June 24, 1938 to father Shelby Brayton Banks... View Obituary & Service Information

The family of James K. Banks created this Life Tributes page to make it easy to share your memories.

James Kenneth Banks, 83 of Hillsboro, Ohio has passed away on...

Send flowers to the Banks family.