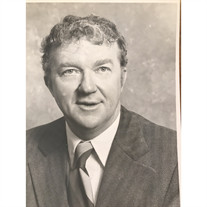 Jack E. Walker, 91 years of Hillsboro, passed away Saturday, May 9, 2020. Jack was born August 3, 1928 in Highland County, the son of the late Lon L. and Ruth Ellen (Warnock) Walker. Beside his parents, Jack was preceded in death by daughter-in-law, Meggan Walker and sister, Margaret Fetterly. Jack was a graduate of Hillsboro High School and the Ohio State University. Jack served his Country in the U.S. Army during the Korean War. After the war, Jack returned to Hillsboro and was an insurance agent for Nationwide Insurance for 33 years. Jack was a member of the Prospect United Methodist Church, served on the board of the Prospect Cemetery Association and was on the Board of Directors of the Merchants Bank for many years. Jack was a true public servant, serving on the Hillsboro City School Board, Past President of the Hillsboro Rotary Club, Past Grand Exalted Ruler and a member of the Hall of Fame of the Hillsboro Elks Lodge #361. Jack was united in marriage to Patricia Ann (Carey) Walker who celebrated 61 years of marriage. Jack and Pat were blessed with two sons, Dow Walker of South Riding, VA. and Jay (Jennifer) Walker of Granville, OH; four grandchildren, Arik, Sage, Nicholas and Madeline Walker; brother-in-law and sister-in-law, Donald and Diana Carey of Hillsboro; three nephews, John (Barb) Fetterly, Pat (Carol) Fetterly, Dean (Lisa) Fetterly, one niece, Jerry (Gary) Gatti and a host of friends. Funeral services will be held at the Convenience of the Family at the Thompson Funeral Home in Hillsboro with Pastor John Waugh officiating. Burial will follow in the Prospect Cemetery. A memorial service will be held at a later date. Memorials may be made to the Prospect United Methodist Church, 5759 W. New Market Rd., Hillsboro, OH or Prospect Cemetery Association, 4470 State Route 73, Hillsboro, OH 45133 To sign our online quest book, please visit us at www.thompsonfuneralhomes.com.

Jack E. Walker, 91 years of Hillsboro, passed away Saturday, May 9, 2020. Jack was born August 3, 1928 in Highland County, the son of the late Lon L. and Ruth Ellen (Warnock) Walker. Beside his parents, Jack was preceded in death by daughter-in-law,... View Obituary & Service Information

The family of Jack E. Walker created this Life Tributes page to make it easy to share your memories.

Send flowers to the Walker family.