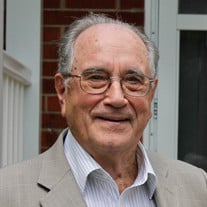 Jack Irvin Hope, age 92, passed away on Thursday, June 10, 2021 in Hillsboro, Ohio. He was born on June 11, 1928 in Rainsboro, Ohio to Irvin and Gertrude (Winegar) Hope. His family moved to Richland County, Ohio when he was young, and he graduated from Bellville High School in 1946. While in high school Jack worked at the Mansfield Airport, where he learned to fly and obtained his pilot's license. After graduation, Jack spent the summer hitchhiking across the country, working along the way. In the fall he got a job at American Airlines in Washington DC. He attended Catholic University in Washington DC and graduated Magna Cum Laude in June 1951 with a degree in aeronautical engineering. In December of 1950 Jack married Anita Mahon and he began his engineering career with General Electric, working in several cities over the years. His work assignments included the design of a nuclear aircraft engine and the design and marketing of advanced aircraft engines. After 12 years at GE, he next worked as Director of Aircraft Propulsion for North American Aviation in Los Angeles, California. This was followed by 2 years as Vice President of the Cummins Engine Company in Columbus, Indiana. Also during this time, Jack worked on special assignments for the government, including a period of time from 1970 to 1973 working in the White House Office of Science and Technology. While working in DC he was involved in the development of a license for a joint venture with SNECMA in France for a new aircraft engine. In 1973 he then returned to GE to manage this joint venture in both Cincinnati and Paris. CFM-56 was certified in 1978. Jack resigned from GE in 1980 and started a joint venture with Ralph Anderson of the Belcan Corporation to design a new engine concept called a Giesel. He had an Army contract to work on this project at his farm until 2001. Throughout his career he also maintained a working farm in Brushcreek Township. No matter where his engineering career took him, he always considered Highland County to be his home. Jack's interests included the history of Highland County and the activities of his ancestors in its development. He was a member of the Highland County Historical Society and the South Central Ohio Genealogical Society. Jack was preceded in death by his parents; his first wife, Anita Hope; his brothers, Bob (Patricia) and Jim Hope and his sister Faith Ann (Chuck) Pickens. He is survived by his second wife, Patricia Stebbins Hope, his daughter Linda (Tim) Doerger, his granddaughter, Emily (Nathan) Head, two sisters-in-law, Janet Hope and Joyce Mahon; three great grandchildren, Tyler, Andrew, and Isabel Head, 3 stepchildren, and 8 great step grandchildren. He is also survived by many nieces, nephews, cousins and friends. Funeral services will be 1:00pm Friday June 18, 2021 at Thompson Funeral Home. Burial will follow at the Hulitt Cemetery in Bainbridge, Ohio. Visitation will be 11:00am until time of service Friday June 18, 2021 at Thompson Funeral Home. Donations can be made to the Highland County Historical Society, 151 E. Main Street, Hillsboro, Ohio 45133.

Jack Irvin Hope, age 92, passed away on Thursday, June 10, 2021 in Hillsboro, Ohio. He was born on June 11, 1928 in Rainsboro, Ohio to Irvin and Gertrude (Winegar) Hope. His family moved to Richland County, Ohio when he was young, and he graduated... View Obituary & Service Information

The family of Jack Hope created this Life Tributes page to make it easy to share your memories.

Send flowers to the Hope family.