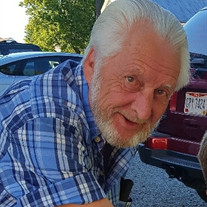 Hugh B. Stultz, 78 years of Hillsboro, passed away Saturday, December 25, 2021. Hugh was born November 14, 1943 in Hillsboro, the son of the late Willard B. and Laura Blanche (Riley) Stultz. Beside his parents, Hugh was preceded in death by... View Obituary & Service Information

The family of Hugh B Stultz created this Life Tributes page to make it easy to share your memories.

Hugh B. Stultz, 78 years of Hillsboro, passed away Saturday,...

Send flowers to the Stultz family.