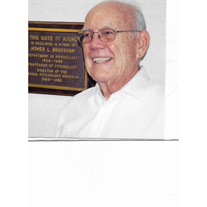 Dr. Homer Leslie Bradshaw of Sinking Spring, Ohio died on September 15, 2019 at the age of 97 in Friendship Village in Kalamazoo, Michigan. Homer was born on July 29, 1922 in Pomeroy, Ohio and raised in Howland, Ohio. After high school he joined the 1878th Aviation Battalion building landing fields in the Pacific for the B29s that would carry the atomic bomb to Japan and would hasten the end of the Second World War. After the war Homer enrolled on the GI Bill at Ohio University where he graduated in 1952 Summa Cum Laude with his B.S. degree. He later attended Ohio State University where he received his M.S. degree and PhD in psychology. Upon completion of his doctorate, Homer joined the psychology faculty at Ohio University in Athens where he pioneered work and training in Educational Psychology. He retired in 1985 with the rank of Professor from the Department of Psychology. He served as the Director of the Graduate School of Psychology Program and was honored with an Emeritus Professorship upon retirement. From 1962 to 1964 Homer was contracted by the United States Government to serve as Technical Advisor to the Universities of Saigon and Hue in then South Viet Nam. Homer and his wife Joan (Koby) lived and worked in Hue in central Viet Nam overseeing the building of the Faculty of Pedagogy. It was in Hue where they met Jay and Ann Parsons, not yet married, who over the years were to become their adopted children and in turn the Parsons' children, Alison and Tim, became their adopted grandchildren. However the Parsons were not the Bradshaw's only adopted children. Before going to Viet Nam Homer and Joan befriended Jean (Foster) Calladine, Linda (Potter) Miller and Connie (Glasgo) Gross, undergraduates at Ohio University. The Bradshaw's took these young women on a month-long camping trip which enabled them to attend a Methodist student conference in California. This cemented a special friendship. All of these friendships became life long "family". During Homer's illustrious career he served as consultant to a variety of educational agencies. He is the past president of the Ohio Psychology Association and a member of a number of professional organizations and national honoraries. Homer is the recipient of the Clyde V. Bartlett Distinguished Service Award, the highest professional recognition for Ohio School Psychologists. His work received formal recognition from both the Ohio 96th General Assembly and the House of Representatives for outstanding service to Ohio. The psychology testing rooms at O.U. were named after Homer in recognition of his contribution to the field and to the university. Homer continued his love of teaching in retirement, working with students from the area schools who needed extra help. After retirement Homer and Joan built their home in Sinking Spring. After Joan's untimely death in 1997, Homer became an active member of the Sinking Spring Community Church where he taught Sunday School for many years and volunteered for a variety of fund raising events. He established a particularly close relationship with Rev. Greg and Diane Roberts during those years. Homer passed away quietly surrounded by his "family" of Jay and Ann Parsons, his grand-daughter Alison and her husband Eric and their son Fletcher. Homer died with no close blood kin and is survived by his sister-in-law Suzanne Ambrose. A memorial service will be held at 1:00 pm on October 27, 2019 in the Sinking Spring Community Center. Homer loved flowers that he planted with wild abandon around his home in Sinking Spring. If anyone is considering sending flowers to Homer's memorial service, would you instead consider contributing to a scholarship fund established in Homer's name to support a graduate of Peebles High School, a cause which Homer highly valued? Contributions can be sent to: ACOVSD, c/o Mary Beth Louderback, 141 Lloyd Road, West Union, OH 45693. Thompson Funeral Home is serving the family. To sign our online guestbook, please visit us at www.thompsonfuneralhomes.com

Dr. Homer Leslie Bradshaw of Sinking Spring, Ohio died on September 15, 2019 at the age of 97 in Friendship Village in Kalamazoo, Michigan. Homer was born on July 29, 1922 in Pomeroy, Ohio and raised in Howland, Ohio. After high school he joined... View Obituary & Service Information

The family of Homer Bradshaw created this Life Tributes page to make it easy to share your memories.

Send flowers to the Bradshaw family.