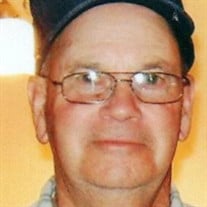 Junior was born April 27, 1932 in Highland County, the son of the late Everett and Elizabeth (Gallaher) Tucker, Sr. Besides his parents, he was preceded in death by two sisters, Geneva "Dolly" Stanley and Katherine "Kat" Hilterbran. Junior was a lifelong farmer and loved driving a truck where he hauled milk in cans and later a milk tanker. Junior enjoyed a long career at Country Mark, where he retired the first time before going back to work for Hamilton Farms Trucking, from which he retired a second time. On March 12, 1952 Junior was united in marriage to Juanita (Newkirk) Tucker whom survives. Junior and Juanita were blessed with two daughters, Rita Campbell of Greenfield and Tisha (Aaron) Tackett of Hillsboro; five loving grandchildren, Angela (Jay) Wile, Craig (Brandy) Campbell, Kyle (Heather) Paugh, Taylor Tackett and Trent Tackett; four precious great grandchildren, Trenner Wile, Aubrey Wile, Tucker Wile and Carter Campbell; three sisters, Juanita Hilterbran of Mt. Sterling, OH, Bernice Epling of Greenfield, OH, Henrietta Holbert of Xenia, OH; brother, Wayne (Bessie) Tucker of Greenfield, OH; brother-in-law, Howard Stanley of Hillsboro, OH; several nieces, nephews, cousins and a host of friends. As a young man, Junior began working on the family farm and quickly discovered the love he had for farming and the satisfaction he felt after putting in a long day of hard work. As an adult, he held a full time job while also managing his family farm he owned with Juanita. Junior and Juanita first found themselves on the farm as a young couple farming and caring for the land in exchange for living there. The owner listed the land and home for sale at a time when the Tucker's were not financially able to purchase it, so they had to move. They wouldn't be gone long. Fast forward a few years later when the new owner put the property up for sale and they were given another opportunity to purchase it. Never losing sight of their dream, through hard work and dedication, the Tucker's became the proud owners, taking great pride in the beautiful land they owned for more than 40 years. This story is a testament to the man Junior was. If he wanted something, he knew he had to work for it. The Tucker farm was a treasured place, full of memories of children, grandchildren, and celebrating holidays and summer barbeques with extended family. Junior was a devoted husband to Juanita throughout their 69 years of marriage, during which they raised their two daughters and stayed very involved with all of their grandchildren during their younger years. He remained a steady influence in the lives of his grandchildren and great-grandchildren by instilling his values and ethics during their influential years. When he wasn't working, Junior thoroughly enjoyed camping with his wife and family. Junior is accurately described by family and friends as the strong, quiet type, observing the world around him and not shy to speak his mind when called to. If Junior was speaking, people were listening. His presence commanded respect, which was easily earned by the way he lived his life. Although Junior is no longer physically with us, he left behind a legacy that will not soon be forgotten. Likely unknown to him, Junior was admired by many friends, family and acquaintances who had the privilege of crossing paths during his life. He inspired others with his constant display of honor, integrity and loyalty. These were guiding principles throughout his life and are some of the same qualities of which the foundation of this great country was built. They say the true test of a man's character is what he does when no one is watching. What Junior likely didn't know is that some of us were always watching him. Young children were fascinated by his quiet, commanding presence and his instincts to just keep working, no matter how big or small the task. He inspired many without realizing it and that is one of the greatest accomplishments of his long, well-lived life. But, let he not be forgotten for being a dedicated brother, husband, father and grandfather that left a huge mark on the lives and hearts of his family for which he was the glue. Rest easy, Junior. Your work on this Earth is done now. Funeral services will be held 1:00 P.M. Monday, October 11, 2021 at the Thompson Funeral Home in Hillsboro. Burial will follow in the Greenfield Cemetery. Visitation will be held Monday from 11:00 A.M. until 1:00 P.M. at the Thompson Funeral Home. To sign our online guestbook, please visit us at www.thompsonfuneralhomes.com.

Junior was born April 27, 1932 in Highland County, the son of the late Everett and Elizabeth (Gallaher) Tucker, Sr. Besides his parents, he was preceded in death by two sisters, Geneva "Dolly" Stanley and Katherine "Kat" Hilterbran. Junior... View Obituary & Service Information

The family of Everett "Junior" Tucker, Jr created this Life Tributes page to make it easy to share your memories.

Send flowers to the Tucker family.