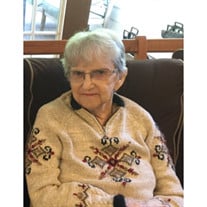 Bettye Lou Coomer, 85 years of Hillsboro, passed Friday, July 5, 2019. Bettye was born April 15, 1934 in Whitley City, KY., the daughter of the late Corbett and Nora (King) Foster. Besides her parents, Bettye was preceded in death by one granddaughter;... View Obituary & Service Information

The family of Bettye L. Coomer created this Life Tributes page to make it easy to share your memories.

Send flowers to the Coomer family.