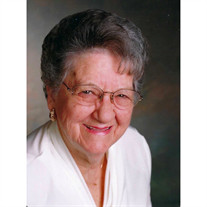 Barbara Maxine Kratzer, 85, of Hillsboro, died September 30, 2020 at The Laurels of Hillsboro. Maxine was born at Serpent Mound Park on October 23, 1934, the daughter of the late Guy and Grace (Havens) Wallace. She was also preceded in death by her beloved husband, Vernon P. "Burk" Kratzer, and her brothers Harold Wallace and Robert Wallace. Maxine was raised in Locust Grove, Ohio, where she graduated from Franklin High School in 1952. During school, she was a cheerleader and played trumpet in the band. She was very proud to have played "Taps" at military funerals in Adams County all throughout high school. She went on to graduate from the Business Training School in Chillicothe with a degree in bookkeeping. Maxine worked as the bookkeeper for Liston's Gas Company, where she met her husband, Burk. During this time, she also served as the Franklin Township clerk and managed the Locust Grove grocery store for several years until her husband's retirement. They subsequently moved to Hillsboro, where she worked at the Union Stock Yards Co. and Thompson Funeral Home for many years. Maxine was a proud member of the Leighton Chapter #521, and later the Hillsboro Chapter #441 Order of the Eastern Star, where she served as a Worthy Matron, Grand Representative to South Dakota, and President of the 21st District. She was also a lifelong Methodist, attending the Locust Grove Methodist Church before transferring her membership to the Hillsboro First United Methodist Church. She was always an active member of the communities she resided in, contributing to many different local organizations over the years. Maxine is survived by her son, Funeral Director Steve (Susan) Thompson of Hillsboro, her granddaughters Allee (Kevin Curtis) Thompson and Andrea Thompson, her nephew Robert (Bobbi Daniels) Wallace of Peebles, her great-nephews Brade Wallace and Brevan Wallace, her great-niece Baylee Wallace, and her sister-in-law Deloris Wallace of Peebles. An Eastern Star service for family and friends will be held at Thompson Funeral Home, Sunday October 4, 2020 at 3pm. A private burial will be held at the Locus Grove Cemetery at the convenience of the family. Donations may be made to the Hillsboro Chapter #441 Order of the Eastern Star, 112 E. Main St., Hillsboro, OH 45133

Barbara Maxine Kratzer, 85, of Hillsboro, died September 30, 2020 at The Laurels of Hillsboro. Maxine was born at Serpent Mound Park on October 23, 1934, the daughter of the late Guy and Grace (Havens) Wallace. She was also preceded in death... View Obituary & Service Information

The family of Barbara Maxine Kratzer created this Life Tributes page to make it easy to share your memories.

Send flowers to the Kratzer family.