To share your memory on the wall of William Siddons, sign in using one of the following options:

Bill was born in Hillsboro on April 10, 1931, the son of the late Basil Siddons and Mary (Roberds) Gall. He is also preceded by his sister, Vir... Read More
William H. "Bill" Siddons, 89 years of Hillsboro, passed away on Wednesday September 9, 2020.

Bill was born in Hillsboro on April 10, 1931, the son of the late Basil Siddons and Mary (Roberds) Gall. He is also preceded by his sister, Virginia Boyle.

Bill was a 1949 graduate of Hillsboro High School and attended the Ohio University. Bill was a proud veteran serving in the 14th Infantry on the front lines for 21 months from 1951 to 1953 during the Korean War earning the rank of Staff Sergeant. Bill worked many years at the Farmers and Traders Bank in uptown Hillsboro, now know as U.S. Bank. He retired after 46 years of service as Bank President. He served on the Bank Board of Directors from 1970-2001.After retiring from the bank, Bill sold real estate for Wilson National Real Estate in Hillsboro for several years. Bill was a member of the Hillsboro 1st United Methodist Church, life member of the VFW Post #9094 in Hillsboro and Hillsboro American Legion Post # 129, serving as the Commander in 1961-1962 and 1997-1998, Highland Lodge #38 F.& A.M. over 60 years. Bill served as the Liberty Township Clerk for six terms, trustee of the Hillsboro Cemetery for many years, President of the Hillsboro Chamber of Commerce in 1966, Treasure of the CIC from 1968 to 2001.

Funeral Services will be 1:00 P.M. Saturday, September 12, 2020 at the Thompson Funeral Home in Hillsboro. Marvin Wilson will officiate services. Burial will follow in the Hillsboro Cemetery with Military Honors conducted by the the Highland County Honor Guard.

To sign our online guestbook, please visit us at www.thompsonfuneralhomes.com
Read Less

To send flowers to the family or plant a tree in memory of William H. "Bill" Siddons, please visit our Heartfelt Sympathies Store.

Receive notifications about information and event scheduling for William

We encourage you to share your most beloved memories of William here, so that the family and other loved ones can always see it. You can upload cherished photographs, or share your favorite stories, and can even comment on those shared by others.

Posted Sep 15, 2020 at 08:22am
So sorry to hear of Bill’s passing. My thoughts and prayers are with the family. Bill was a kind, compassionate man willing to help wherever he could.
Comment Share
Share via:
KF

Posted Sep 12, 2020 at 11:11am
Ann and family, I so very sorry for your loss!!!
I always enjoyed talking with Bill up town when I worked Susan Davis Thompson and at McDonald's! He was such a kind and pleasant man! My dad, Jim Fitzpatrick, also thought very highly of Bill! You are in my thoughts and prayers! God bless!
Comment Share
Share via:
L

Posted Sep 11, 2020 at 08:44pm
Dear Ann & Family:
Devastated to hear of Bill’s passing! What a loss for you and our community! Bill was instrumental in so many lives throughout Highland County through the old F&T Bank, helping with loans for everything from farm animals to houses, and without his expertise, we wouldn’t have prospered as we did. Our deepest sympathy and prayers for all of you as you lay him to rest in God’s Arm’s. 🙏🏻
Comment Share
Share via:
HS

Posted Sep 11, 2020 at 08:30pm
David, our thoughts and prayers are with you and your family during this difficult time.

Flowers were purchased for the family of William Siddons. Send Flowers 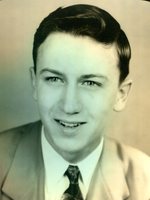